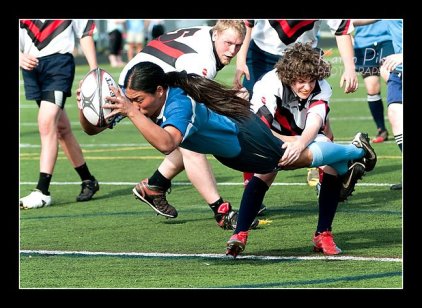 I started playing rugby nearly 8 years ago, as a freshman at South Burlington high school. I was forced into signing up by some friends who were trying to breathe life back into a club that had been dead for a while. I wasn’t super excited when I first started. I had never really excelled at sports and I didn’t know any of the rules. All of that changed after only a few practices. By my junior year I was a captain on the team and I was totally in love with rugby. I loved rugby so much that I would end a practice at high school and drive over to the Burlington men’s club and go for a second round of practice. I was incredibly lucky to be able to experience rugby at a higher level even in high school through the men’s club. Although we rarely (maybe never?) won a game in my 4 years on the high school rugby team,I came away from that program feeling like I had gained something much more important than a winning record.

Since graduating high school in 2011, rugby continues to be a big part of my life. I continued to play at college in a D1 program at Temple University in Philadelphia. When it came time to choose a college having a good rugby program had become my #1 deciding factor on whether or not I would be applying to that college. When I studied abroad in Japan, I was even lucky enough to play internationally where rugby was much more popular than in the US, I got to play for a D1 club in the Tokyo area and even had the honor of getting run over and bloodied by a player chosen for the Japanese National Rugby 7’s squad that year. I had taken a year off from school in Philadelphia but I continued to keep rugby in my life by training and playing with the Burlington men’s club again as a full member rather than a high schooler.

One of the most memorable moments as a rugby player was being able to come back and watch my high school team win the state championship for the first time ever. After playing four years and not winning I had never felt more joy, jealousy, or pride in one moment. I was so envious to watch them celebrate after the game. I had wanted to be in that position for four long years, but it was almost as good being able to cheer them on from the sidelines. I think it was a championship won on the backs of our coaches putting in years and years of hard work bringing the program up from when I started where we weren’t even allowed to practice on the school fields.

My favorite aspect of rugby is the sense of camaraderie everyone has for each other. After every game, everyone forgets about the big fight in the game, the back breaking tackles, the yelling and smack talking on the field. When you leave the field everyone is friends, laughing and talking about the events of the day as if they were reminiscing about a game they played together years ago. Because of this I’ve made countless friends with teammates and rivals alike, friends that I’ll hopefully keep forever. And hopefully I’ll be able to continue making friends through rugby wherever I go. Next fall I’ll be returning to Philadelphia for one final year of rugby at Temple University. If everything goes right, hopefully you’ll be seeing me on your TV’s a little less than a year from now playing in the Collegiate Rugby Championship 7’s tournament aired on NBC every year.

This site uses Akismet to reduce spam. Learn how your comment data is processed.

Thank you for stopping by 802 Rugby. If you have any questions please feel free to contact us. Have a fantastic day!